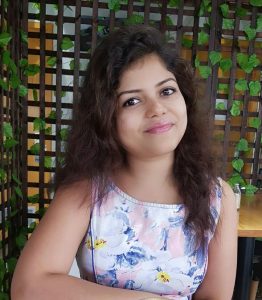 I am a Recruitment professional with International & domestic hiring experience in IT across all verticals and roles in India, Australia and New Zealand. I have recently joined ASPL as a Recruitment Consultant for Technology and professional services bringing 4 years of end to end Recruitment experience. I am passionate about growing teams and dreams and helping professionals find their next career move.

If I am not recruiting, I am either honing my graphology skills, reading a scientific thriller novel or cooking up a storm in the kitchen.

I migrated to Australia 4 years ago after marriage and have an incredibly supportive Husband who promotes my work, nurtures my dreams and helps around the house so I can focus on my career goals.

It has to be my Mother. She has taught me some invaluable lessons that have stuck with me for life. She has taught me resilience and strength. I have seen her go through tough times, from juggling between work and family problems to dealing with her own personal struggles. She ensured I received the best education and always inspired me to be ambitious, dream big and work hard towards it. I have learnt the importance of having a family from her and appreciating the smallest things in life.

It’s hard to pick just one for me. As a teenager, I was inspired by Malala Yousafzai for her activism for girls’ education. At a young age, she is already changing the world through her words and her work.

Michelle Obama is another leader who inspired me by the way she stayed true to herself and redefined what it meant to be the first lady with an approachable, fun, sassy style and how she never let her gender or race determine who she could be and what she could do. Meghan Markle has exemplified that a woman can play several roles, from a civil rights activist to being a prime-time actress to a British princess and standing up for what you believe in. I also look up to Jacinda Ardern, another leader who has exemplified that a high-flying career and a family are not mutually exclusive.

While these women have inspired me at different stages of my life, there are other incredibly brilliant women who surround me every day influencing my future and reshaping my perspective.

I believe women have a competitive edge of soft skills like empathy, critical thinking, networking and a high level of EQ, which are essential leadership qualities. In business, female leaders are excellent in negotiating in high-stake situations, achieving agreements and making deals where men might fall short and this is why they will live up to the positions of leadership and authority. Also, women bring a balance to an executive board by bringing in a different perspective based on their different set of life experiences. This is useful in broadening and deepening the company’s insight into the unique challenges that they face, making it more agile and effective to deal with.

Being in recruitment for quite some time, it is appalling to see how females have been underrepresented in Business for so long and there are several deep-seated barriers that continue to impede women’s entry and retention in the workplace. I have observed gender-based stereotype being the most common barrier which subtly influences employment decisions and hinders women from getting the right job that they deserve.

Also, women often grow up with lack of family role models and have to live up to societal expectations regarding gender roles in terms of looking after household work and childcare, holding them back from career advancement.

Many employers have this unconscious bias and confusion between presenteeism and commitment, flexible work with lack of commitment, lack of ability and aspiration that in turn affects their choice in hiring women.

One of the primary reasons that discourage women is the shortage of funding and investments, given the high risk involved in starting a business. Women are more cautious when it comes to money and the fear of failure and going into debt holds back many.

Women may also be less likely to start a business due to their responsibility as a family’s primary caregiver and juggling such high demanding work alongside childcare is usually frowned upon and less supported.

Supporting women at work are not only good for businesses but also for the economy as a whole. From a recruitment perspective, I believe we should embrace recruitment practices that encourage women to apply for roles and not let age-old stereotypes and unconscious biases get in the way of selection for job opportunities. Companies should embrace a workplace culture that is inclusive and gender-sensitive. They should promote and display zero tolerance for sexual harassment, bullying and discrimination which is one of the many reasons for female turnovers in male-dominated industries.

Also, the least women can do is support each other within the workplace. Whether it’s a refusal to join in the banter about a fellow female colleague, publicly congratulating a woman on her achievements or standing up for other women when needed, sets the standards of behaviour for the entire organisation and makes women feel valued and supported.

While I understand that it can be a battle to create waves of change in male-dominated industries that place a high value on gender roles and identities, it is definitely the one that women shouldn’t have to take on alone.