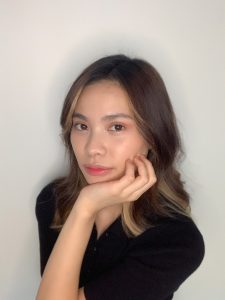 I’m an education student for early childhood and primary that has a passion for learning and development, and also children. I have been working in a customer service environment for almost nine years now, and I could say, I honestly love it!

I’d say, my boss, CEO Kris Grant, an amazing and supportive woman who works so diligently, yet has a motherly nature that strives you to be better and stronger than ever.

To be honest, there is not one specific female leader out there that I would look up to. I believe they’re all incredible and I would support them for their efforts to make a difference to the world.

I think women deserve to be recognised for their efforts in the business. There are too few women reaching senior leadership positions, and it’s not because of a lack of talented female employees. Within organisations, it’s also often that women face barriers to progress. By increasing the number of women in the business, this would enhance gender diversity and eliminate the barriers of managerial advancement by women.

Research has shown that an increase of women in leadership is helping businesses thrive. By closing the gender gap and taking meaningful action toward more excellent female representation, workplaces will be more likely to be productive.

I think a large barrier for women in the recruitment process is gender discrimination. With women being underrepresented at every level in the corporate pipeline, limits the opportunities of women to achieve their career goals. I feel like a lot of roles a ‘gender’ biased as well. Many people, even recruiters, have certain beliefs that specific roles are more suitable for women, and some may say, higher job opportunities at managerial levels may be more suitable for men.

With businesses, especially those that have large discrepancies in gender employment (greater level of male employment), women would find it considerably less likely to find themselves in high echelons of the business world.

I think its definitely culture. Even though culture is slightly changing and becoming diverse compared to the traditional beliefs, women are still normalised to be a ‘full-time housewife’ or sticking to gender-based roles compared to men who are ‘breadwinners’ of the household.

Often, women are stuck in those beliefs of responsibilities of caretaking instead of taking on challenges and opportunities for the benefit of their career goals and dreams.

I think it would start with education. If we change the culture in any organisation and educating employees about gender equality, organisations would be committed to seeing both men and women progress. This would often lead to a more collaborative and meritocratic entrepreneurial world.

With creative and flexible environments, women’s contributions would not be overlooked, and they would feel empowered and comfortable to step forward to take new challenges and opportunities.